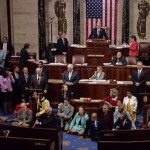 The sit-in. From C-Span.

Will all members of Congress willing to subordinate personal interest to the will of the people please stand up? No, wait. They’re sitting down. Sitting down in protest of the GOP majority’s refusal to allow a vote on proposed gun control measures.

Led by the courageous Representative John Lewis, a veteran of the civil rights movement, Democratic representatives and some of their Senate colleagues are occupying the floor of the House to force a showdown and take a stand against gun violence. My own representative joined the protest. Good for her!

Can anyone open the GOP’s eyes to the pervasiveness of senseless gun violence across this country and the urgent need to control illegal weapons sales? Even constitutional rights have boundaries when they conflict with the common good.