I Found my Park 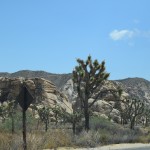 The National Parks Service has been encouraging the country to “Find Your Park” in this, its 100th anniversary year. My husband found his park several years ago. He loves Death Valley National Park so much that we set aside our own Death Valley Day whenever we visit Las Vegas. Feeling a bit left out, I suggested that this trip we set aside another day for Joshua Tree National Park, which I’ve wanted to see since I laid eyes on my first Joshua Tree some years ago.

It was with no small level of anticipation that I awoke the morning of our adventure. It takes roughly four hours to drive from Las Vegas to Joshua Tree if you take the diagonal route through the Mojave National Preserve, which is a visual treat in itself. Miles and miles of undulating roadway past creosote bushes and Joshua Trees, jagged mountains in the distance. A few abandoned rail yards and old buildings along the way reminded us that this area once thrived. I especially enjoyed passing through the town of Kelso, California, with its old rail cars and abandoned post office.

Many miles of starkly captivating desert scenery later (including a short jog through Amboy, CA, on Route 66) we arrived in the village of Joshua Tree, the funky, artsy capital of the Morongo Basin. I bought a cup of coffee and some beans to take home from the Joshua Tree Coffee Company. Between it and the park entrance, we drove through one of the most unusual, yet visually appealing, residential areas I’ve ever seen: small desert houses plunked down on semicircular hardpan streets in hodgepodge fashion, sloping gradually upward along the side of a hill to the park entrance.

The park is the coolest place on the planet, so far as I’m concerned. Otherworldly Joshua Trees, branches raised heavenward, and massive, odd rock formations that resemble clay pieces left behind by giants eons ago: I felt like a wide-eyed child watching the scenery pass by from the air conditioned comfort of our rental. (The wall of heat that greeted me every time I opened the door got to be a bit much, I confess. I took photographs from inside the car.)

It speaks to me, this place. It tugs and lifts my spirits like none other, perhaps for no other reason than its simplicity. It’s Mother Earth at her most elemental. As time goes on, I find that it’s the untouched landscapes that call to me. Artificial, man made wonders cannot compare to the masterpieces created by unseen natural forces. Fortunately for us and for future generations, the U.S. government has seen fit to preserve these masterpieces.

1 Response to I Found my Park